This article is a stub. You can help Wild Cards Wiki by expanding it. 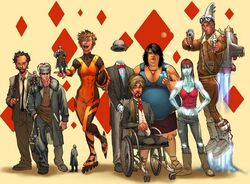 American Hero is a popular reality show starring wild carders as contestants. The winner would win $1,000,000 and be given a city to protect. Season 1 started in 2007. Following the Wild Cards timeline, there seems to have been more than one season per year. The show went on for 9 seasons. There is an equivalent show in Brazil called Heróis Brazil, which went on for at least 6 sesons.

The contestants are initially grouped into four teams named after playing card suites: Team Hearts, Team Clubs, Team Spades, and Team Diamonds. After enough discards, the remaining teams were pooled together into two teams: Black and Red. In Season 1, Team Black consisted of Drummer Boy, Dragon Huntress, The Candle, Holy Roller, and Rosa Loteria. Red Team consisted of Curveball, Earth Witch, Stuntman, Tiffani, and Jade Blossom. A group of discarded contestants went to Egypt to stop the genocide on jokers by the Caliphate. This led to the formation of the Committee.

Community content is available under CC-BY-SA unless otherwise noted.
Advertisement